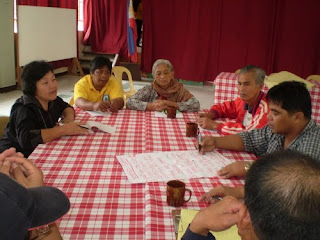 BONTOC, Mountain Province - Despite provisions in the Local Government Code requiring participation of non-government organizations in development councils, this is not significantly observed, Gov. Maximo Dalog said during a workshop consultation on community participation in local governance last Nov. 20 sponsored by Aterfa Network with the support of the provincial government.

The governor noted there are only six accredited organizations who came forward to be accredited in the provincial unit. Dalog called on nongovernment organizations and other sectoral bodies to actively participate in local governance. Similar concerns among local government officials who attended and the non-government sector during the workshop conducted by Aterfa Network in cooperation with the National Commission in Indigenous Peoples-Mountain Province, the provincial government unit, and the global education program of Voluntary Service Overseas.

To require community participation before any submitted project resolution is approved, provincial board member Eufemia Lam-en said the provincial Board requires the respective municipal development plan and the barangay development plan where such is the case. “This will prevent the direct submission of resolutions by individuals to the legislative body”, Lam-en said.

Sanguniang bayan councilor Pedro Macario of Besao also said that the municipal SB requires the barangay development plan along with the minutes of the barangay meeting before a submitted resolution is approved by the SB. Municipal councilor Bryan Bellang of the SB of Bontoc also said they require the barangay certification of a certain project along with the development plan before a submitted resolution gets approved. The usual practice of identifying and approving projects and programs had been in the past directly forwarded to legislative and executive bodies without a barangay or municipal development plan or certification to that effect, before its gets approved for funding.

Although another point to consider is the discretion of the official/s approving the project. Lam-en said she also requires the municipal or barangay plan before acting on the request. Where community participation is lacking in project and program identification, barangay captain Francis Kilongan of Barangay Ambasing, Sagada said he calls for a general assembly among barangay constituents at least quarterly for discussion of barangay concerns and issues. He said government and NGOS should help in educating specific issues of interest to the community in order to attract participation from the people.

Although responsible voting is a necessary element among an enlightened peoples participation, barangay captain chairman of Sagada, Jaime Dugao said. People have to know whom they elect as their officials who can truly represent them. As it is, there is a standing practice and general perception that officials once they are elected are not willing to rock the boat where there are crucial issues which might affect other sectors of the locality affecting their votes.

On the other hand, it is a standing mandate that elected government officials have the accountability for public good and welfare.

The Municipal Local Government Office Officer has a special role in orienting local officials, the participants said. The workshop participants are one in saying that provisions of the Local Government Code and other related laws need to be known by the official to make effective their functions in their own localities. For example, requiring a general assembly twice in the year needs to be known by barangay officials as well as other protocols as the requirement for a development plan before any introduction of a program or project is done.

Winnie Ananayo of Bontoc Women Brigade specially asked DILG Officer Edison Baddal what strategies they do as funding is the usual scapegoat for any undone work. Baddal noted the DILG had been doing clustered orientation in orienting barangay officials on the provisions of local governance. Baddal also specially mentioned that barangays through self help initiatives or through their development fund can allocate a certain amount for the needed orientation. Every municipality has a Municipal Local Government Office Officer devolved from the DILG who is tasked to take care of barangay concerns such as orientations where local governance is concerned.

In the same development, Wilson Kalangeg, legal officer of National Commission on Indigenous Peoples talked on the participation of indigenous cultural communities in their participation in local governance. The Local Government Code specially identified a member of the indigenous cultural communities as a member of the special bodies aside from the women sector. The body came up with a consensus for the municipality of Bontoc through the Sangguniang Bayan and the Sangguniang Panlalawigan to sponsor a resolution for the representation of Indigenous Cultural Communities as a special sector in the Sangguniang Bayan.

Although 99% of the populace are IPs in Mountain Province, there are special concerns faced by IPs which are not focused and discussed in government’s local governance. Juliet Palicos, former SB member of Sabangan said sectoral representatives discuss their special concerns only which need the special participation of indigenous cultural communities as a special sector. Specially, conflict resolutions as to tribal boundaries are a distinct issue which is specially attended to by tribal leaders. Also, issues on telecommunication companies who build their towers on ancestral lands and don’t pay local taxes are special issues needing the special participation on indigenous cultural communities in local governance.

In the course of the workshop, it was noted that there is a harmonious working relationship of tribal elders and government officials in local governance. In Bontoc for example, a Council of Elders operates independent from the local government unit. The tribal council acts as an advisory body to the LGU on tribal issues.

The writer here, as VSO volunteer also shared her experiences having worked among Indigenous Peoples of the northwest Bangladesh. The Bangladesh government has yet to enact policies favorable to the IPs of Bangladesh and the recovery of their ancestral lands. As it is IPs here estimated be around 2 million face extreme landlessness brought about by notorious landgrabbing from mainstream society aided by an inefficient land use system.

Lifted from Northern Philippine Times
Posted by Aterfa Network at 12:09 AM No comments:

Working on the foundation that the youth are the hope of the motherland, Aterfa Network primarily aims to train the youth to be responsible leaders of their own communities and responsible future leaders as well. It aims to develop their knowledge and skills in leadership, documentation, advocacy, arts, and organizational management.

Aterfa is duly registered with the Securities and Exchange Commission on February 14, 2006. It initially launched its existence during the Mountain Province Lang-ay Festival in April 2006 by promoting hand-painted T-shirts featuring environmental and cultural motifs.

Aterfa Network derives its name from the indigenous shrub, aterfa which is used as a material for making walking canes and handles of agricultural tools because of its durability.
Posted by Aterfa Network at 12:00 AM No comments: